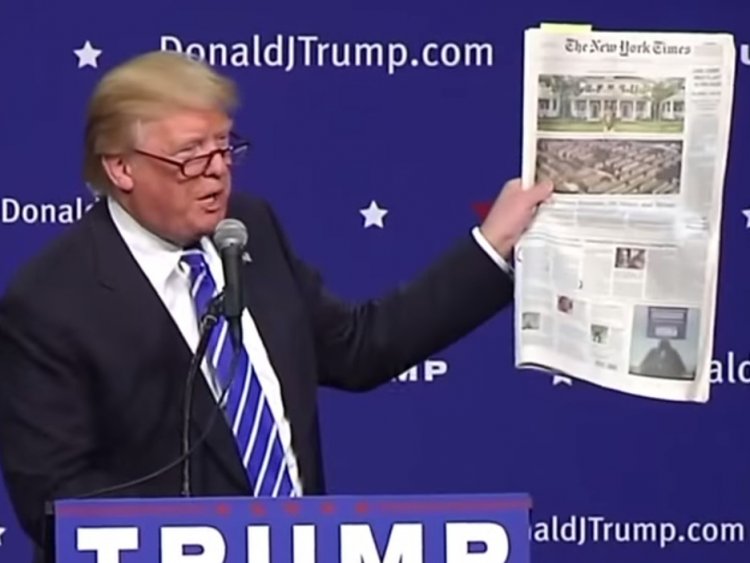 You don’t have to be a Trump supporter to be shocked by the anti-Trump rhetoric flooding the commercial media. Features range from gross political propaganda to pseudo-human-interest stories, economic prognostications, and pure psychobabble. The slander and libel are everywhere you look. What does Trump think about this? Is he “working for Hillary” as has long been suspected?[1] And if so, what is he getting out of the deal? A kick in the butt? The short end of the stick? Just how Trump benefits is hard to fathom. 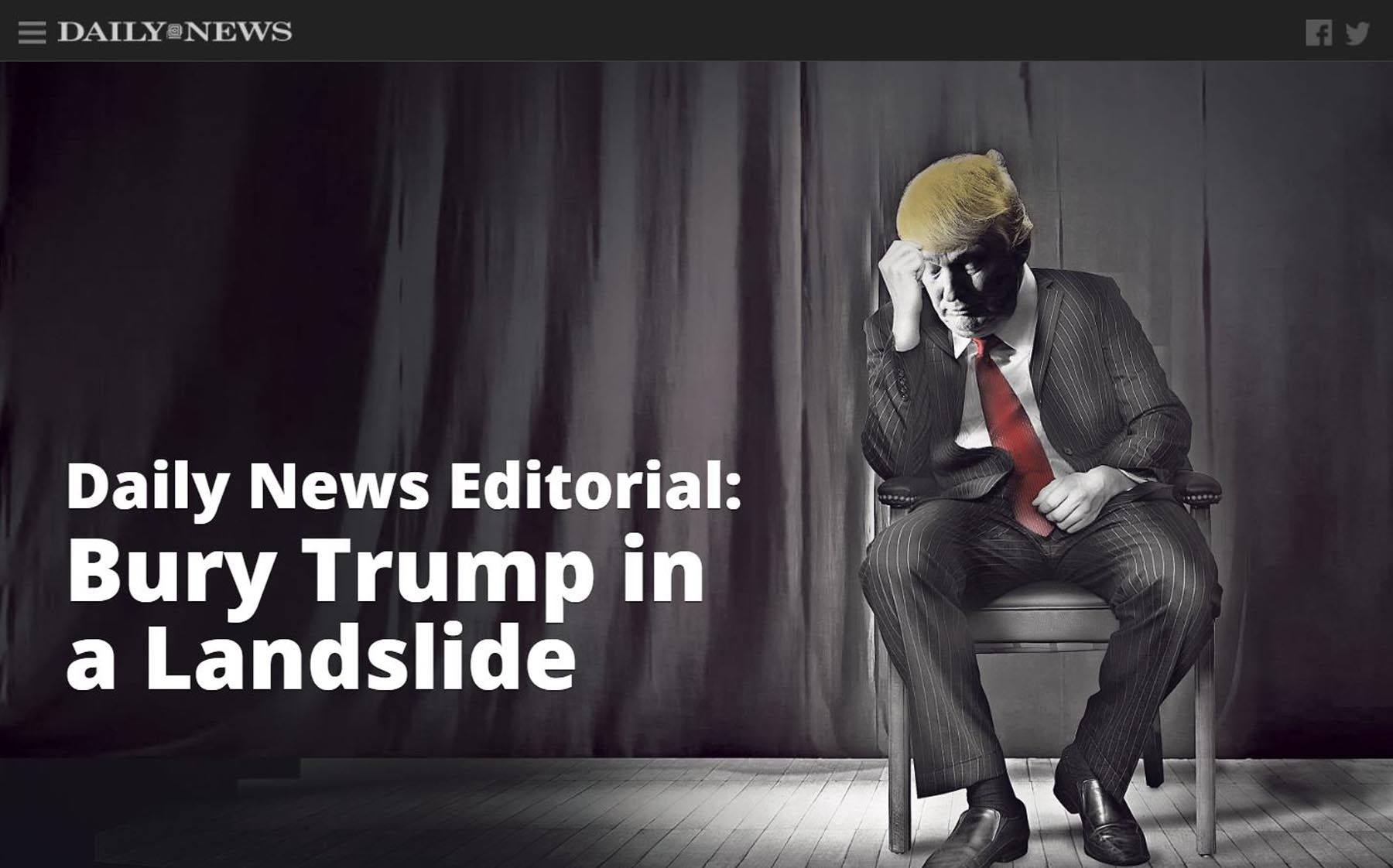 On October 20, the day after the third presidential debate, The New York Daily News ran a gigantic article on Trump’s many faults and follies (nydailynews.com interactive). In the introduction, we learn that Trump is a “liar, thief, bully, hypocrite, sexual victimizer and unhinged, self-adoring demagogue.” We also learn that his defeat is “all but certain,” a recurring theme in the barrage of anti-Trump propaganda. To help us negotiate this epic article, the The News has divided it into 14 chapters: Trump the Demagogue, Trump the Fraudster, Trump the Head Case, Trump the Fake Philanthropist, Trump the Liar, etc. Oh yes – and Trump the Conspiracy Theorist. We have cute cartoons, one showing Trump with a Hitler mustache and another after having plastic surgery to make him look like Lincoln.

Then there’s The New Yorker, that bastion of neo-con fake liberalism, which has been anti-Trump from the outset. In the October 31 issue (The Talk of the Town), we read that Clinton will be elected, “an event that we will welcome for its immense historical importance, and greet with indescribable relief.” We learn that Trump is “a trash-talking, burn-it-to-the-ground demagogue,”  “manifestly unqualified and unfit for office,” and “favors conspiracy theory and fantasy, deriving his knowledge from the darker recesses of the Internet.” Following this endorsement of future-President Clinton, we have “Presumptive: What Would a Fiction Writer Do with the Campaign of 2016?” and the creepy “Trolls for Trump: How the Alt-Right Spreads Fringe Ideas to the Mainstream,” by Andrew Marantz. Then “The Unconnected” (“The Democrats Lost the White Working Class. The Republicans Exploited Them. Can Hillary Clinton Win Them Back?”) by George Packer. Plus several online offerings and erudite cartoons. 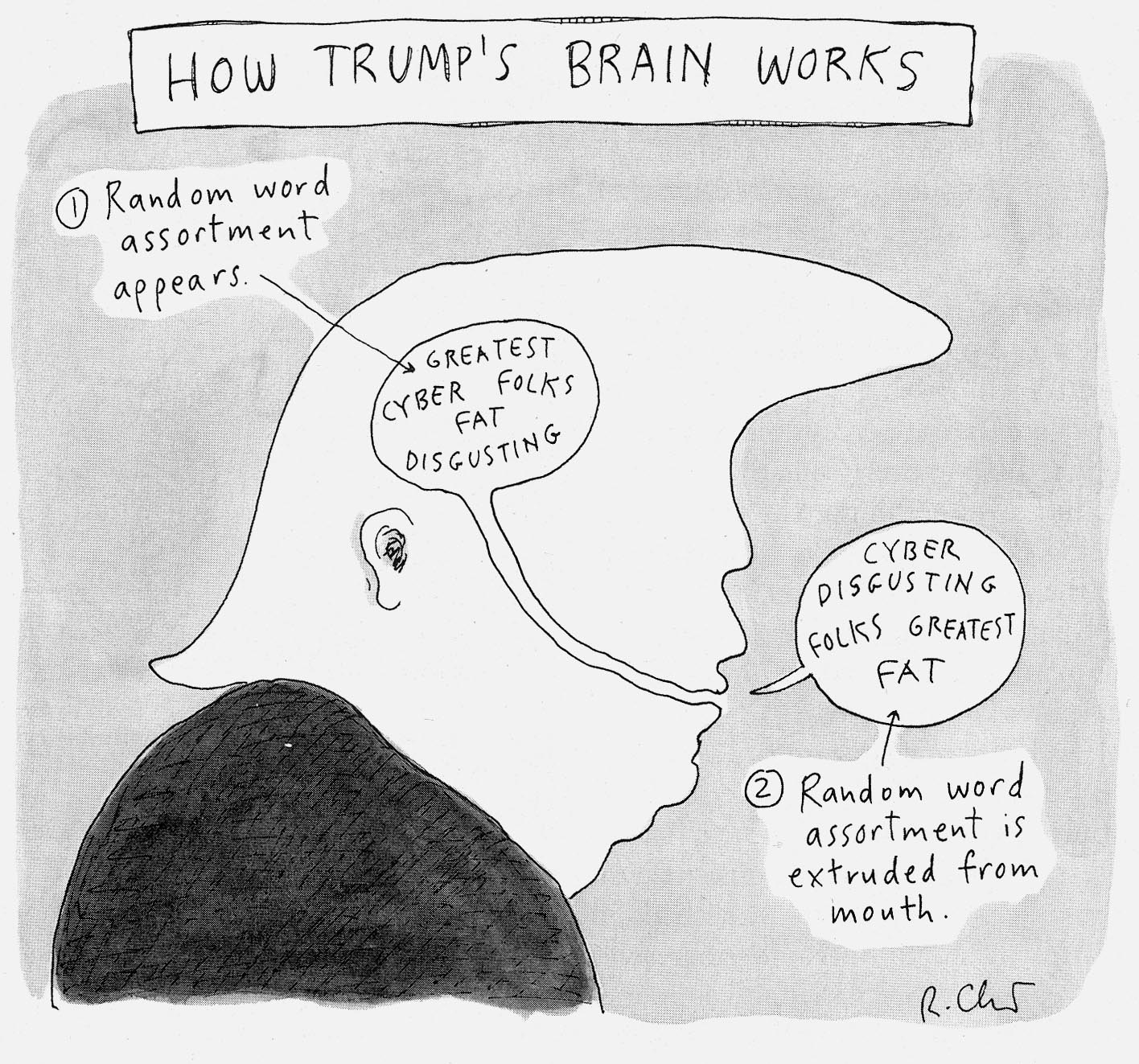 And this is just the tip of the iceberg (which is not melting due to man-made climate change, according to Trump).[2] A survey of The Times coverage for the week following the third debate yields no fewer than 68 articles and editorials bashing Trump, some in egregiously libelous language. And these are just the obvious ones. Below is a list, taken from the print version – since those reading the online Times have only the vaguest idea of what appears in the daily paper. Links to the online articles (where available) are found at the page numbers following the titles.

This trend is set to continue through November 8 – with a stand-out article on October 28: “Trump Backers See Revolution If Clinton Wins: Dark Fears and Talk of a Stolen Election.”

But wait, you say, surely The Times prints articles critical of Hillary as well. No, not really. The very few that appear to find fault actually give her a pass for her lies and bad behavior. Pandering to Wall Street? Hey – no problem.[3] Private e-mails for State Department business? Please.[4] Incriminating campaign e-mails from WikiLeaks? A Russian hack.[5] Serious health problems? A minor bout of pneumonia.[6] And videos of DNC operatives admitting to instigating violence at Trump rallies, and actually conspiring to rig the election?[7] Honestly, does anyone care? (See article 14 above.)

We do get cuddly features like “True or False? Hillary Clinton, a Native Chicagoan, Is a Cubs Fan.” Also a gauzy cover photo for a recent New York Times Magazine along with two admiring articles (“Her Way” and “How Hillary Became ‘Hillary’“). This charade masks her fealty to Israel, a word strangely absent from coverage on foreign powers conspiring to influence the (s)election.[8] 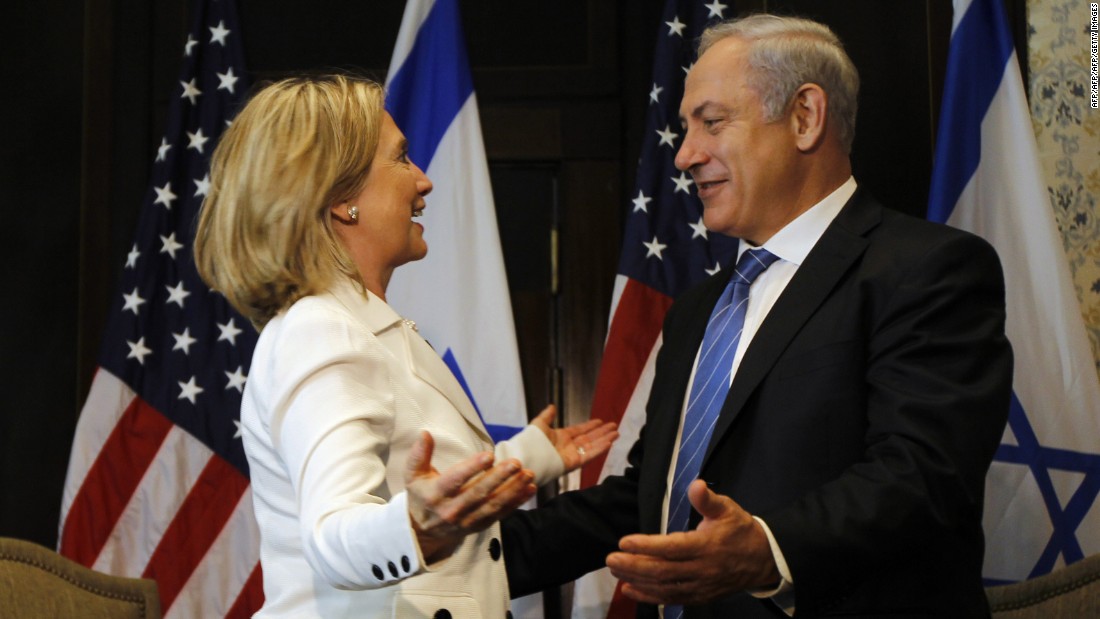 One of the biggest anti-Trump articles is the two-page spread of October 24 (see article 44 above). This catalogs Trump’s insults on Twitter since he declared his candidacy. In tiny but readable print, we see his opinions on people, corporations, the debates, and the electoral process. 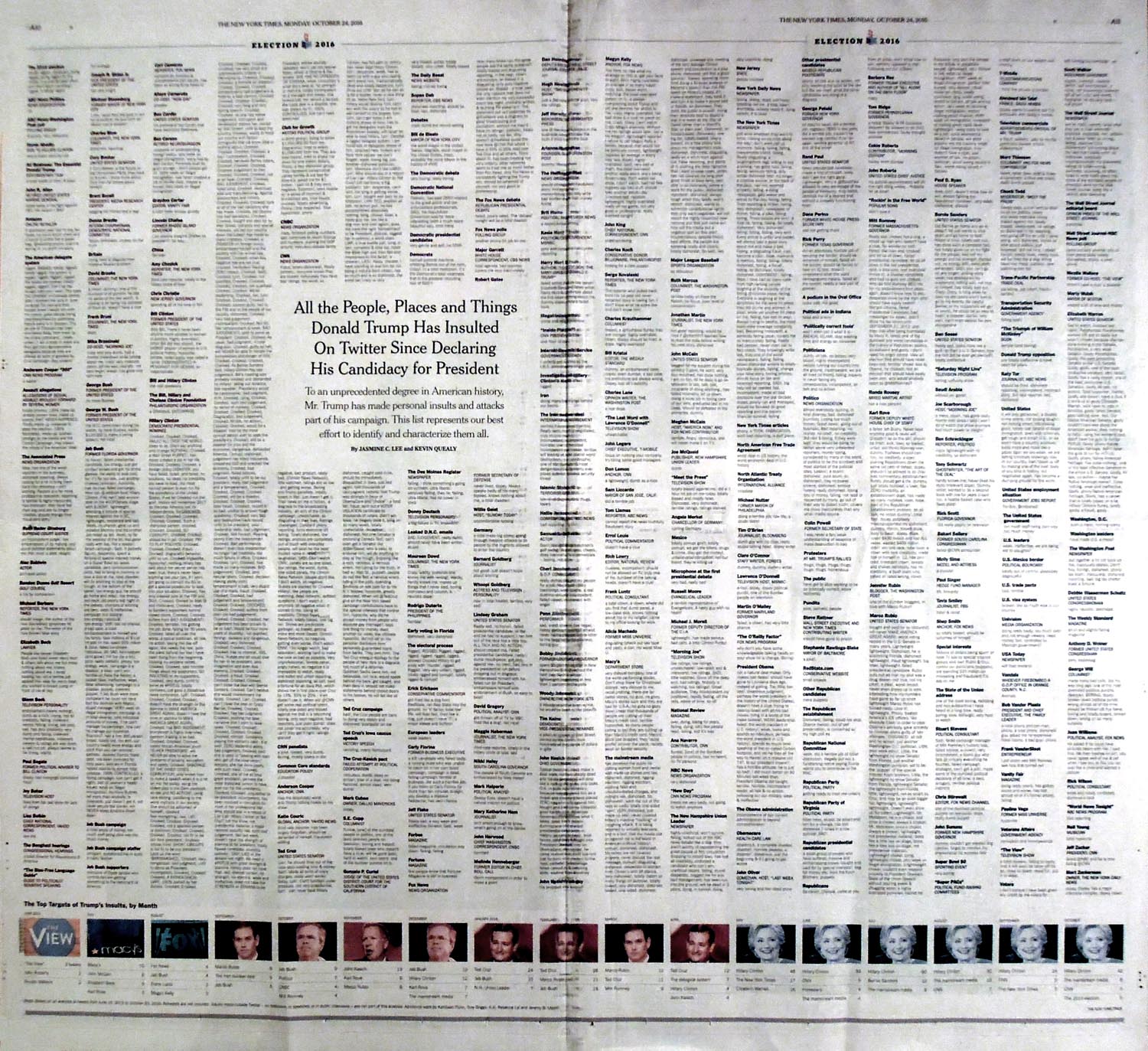 “All the People, Places, and Things Donald Trump Has Insulted on Twitter Since Declaring His Candidacy for President.” The New York Times, October 24, 2016 (A10-A11).

The longest string of insults is reserved for Hillary, but we also have Trump’s comments on the media. On ABC News Politics: “LIE.” On Anderson Cooper 360: “a waste.” On The Wall Street Journal: “bad at math, nobody cares what they say in their editorials anymore…so dishonest…so wrong, so often.” On The New York Daily News: “failing, failing, dead, worthless, bleeding red ink, a total loser.” On The Washington Post: “dishonest reporting, bad, big tax shelter, loses a fortune.” On The New York Times: “Just write whatever they want to write, making up sources along the way! Really disgusting, a laughingstock rag! no longer a credible source…gets worse and worse by the day…newspaper of fiction…false, malicious, and libelous…a disgusting fraud…They knowingly write lies, truly one of the worst newspapers, failing, failing, allows dishonest writers to totally fabricate stories…should focus on fair and balanced reporting…” And as for Charles M. Blow: “dishonest reporting.”

You don’t have to be a Trump supporter to agree with his take on the press.

This article was also published at MemoryHoleBlog.org.