Another day, another fake attack – this time a “vehicular” terror attack perpetrated by one Sayfullo Saipov, a native of Tashkent, Uzbekistan, who supposedly mowed down bicyclists and pedestrians in a rented Home Depot truck on a bike path in lower Manhattan on October 31, 2017. This “Halloween massacre” is billed as “the deadliest terror attack on New York City since September 11, 2001.” 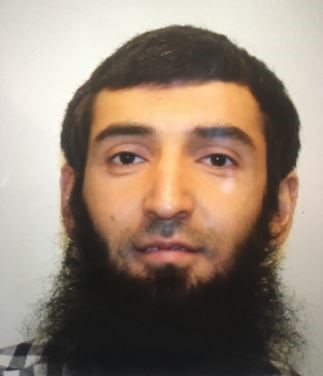 The crack team of investigators from the NYPD and FBI figured the whole thing out in a matter of hours, helped by evidence provided by Sayfullo himself: his alleged cries of “Allahu Akbar,” a note found on the ground with language associated with ISIS (“It will endure”), and the 90 videos and 3,800 images on his cell phone, which of course the FBI recovered. Or, uh, we seem to have TWO cell phones left at the scene by Saipov, according to some reports. 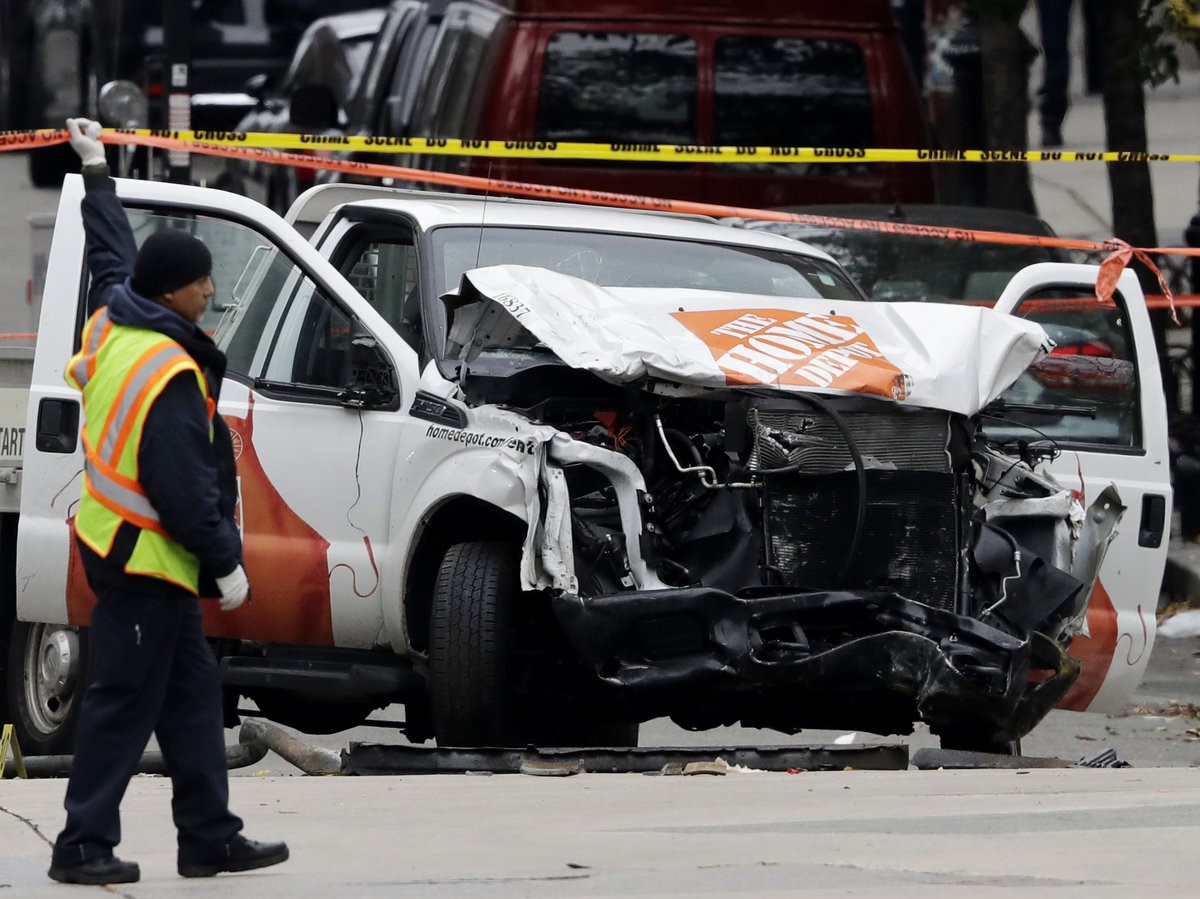 The rented Home Depot truck that Saipov allegedly used to mow down cyclists and pedestrians in New York, although there is no trace of blood anywhere on the vehicle. Image: NPR.

The cell phone videos reportedly show ISIS fighters killing prisoners as well as instructions for making an “explosive device.” The images include shots of Abu Bakr al-Baghdadi, the supposed leader of ISIS. Saipov is said to have been inspired by one video in which al-Baghdadi “questioned what Muslims in the United States and elsewhere were doing to respond to the killing of Muslims in Iraq.”

This from a criminal complaint filed just 24 hours after the (fake) attack occurred, drawing on an interview of Saipov allegedly conducted by the authorities in the hospital, where he was taken after being shot by NYPD officer Ryan Nash. Nash is said to have fired nine shots at Saipov, injuring him, uh, in the stomach, as was first reported, and then it was the leg, and, well, we’re not quite sure about his injuries.[1] Saipov supposedly wanted an ISIS flag displayed in his hospital room. 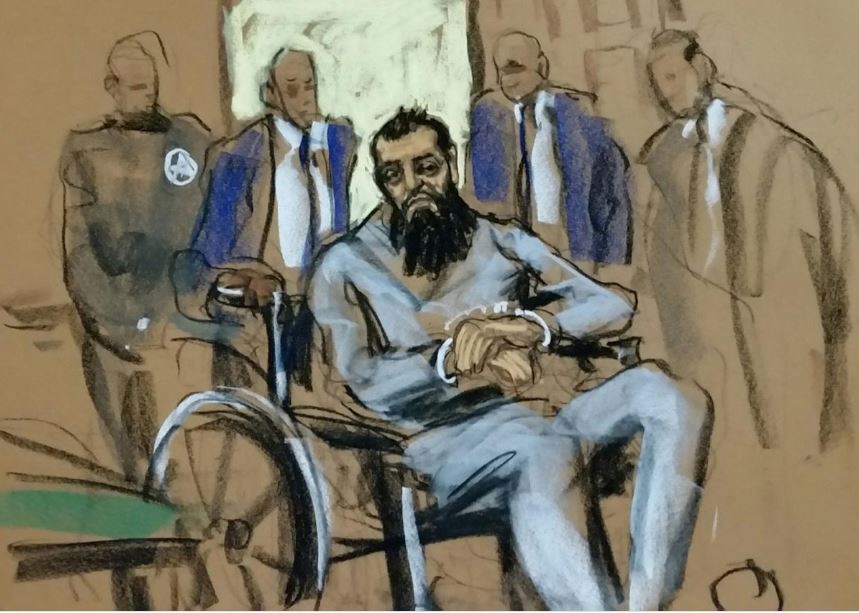 Although shot at close range in the stomach or leg or both, Saipov was able to appear in court the very next day, hunched in a wheelchair, dressed in a gray shirt and pants, with his hair sticking up slightly in the back, according to a colorful description reported by the New York Times. His hands and feet were shackled. Lest one think that he was being treated inhumanely, considering he had just been shot (up to nine times) by a police officer, we are told that his court-appointed lawyer, David E. Patton, asked that he receive a daily change of dressing on his wounds. Officer Nash has been declared a hero.[2] 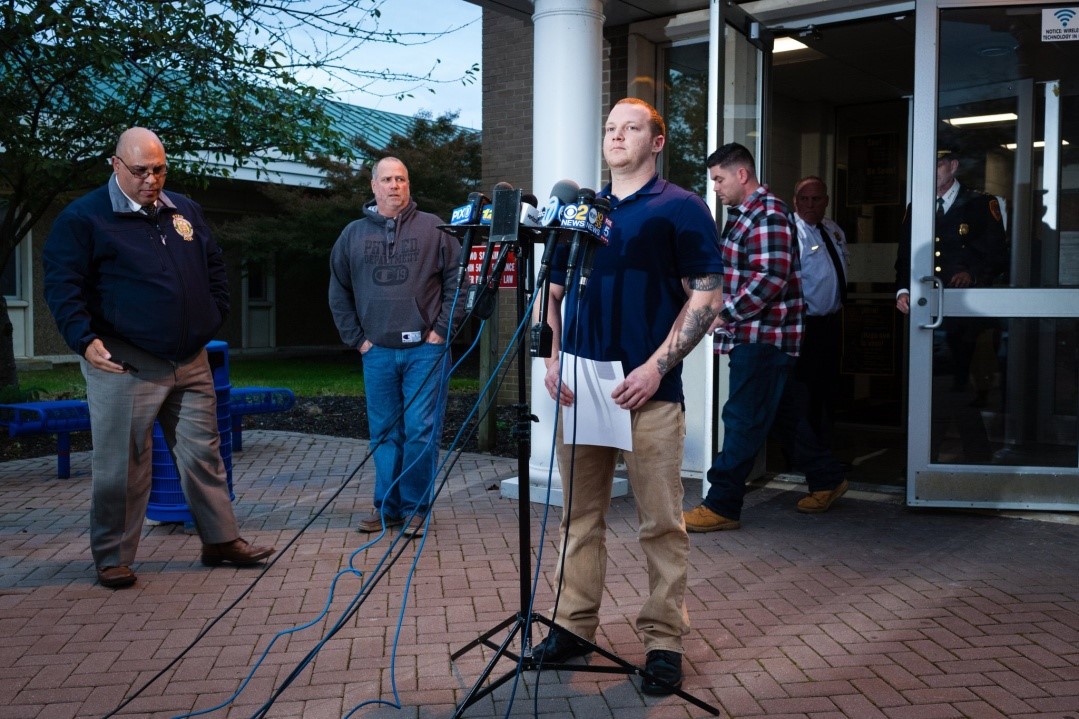 Meanwhile, the photographic evidence of the attack itself consists of the bikes and bodies on the bike path, the Home Depot truck with its front end smashed (but no blood on the truck), and a school bus that Saipov reportedly rammed—although the damage to the bus was so high up that it could only have occurred if the truck had been airborne.[3] The debris on the bike path was also problematic, looking like props hauled in for the press. The bikes were suspiciously “mangled” (as described by the media) in a way that would not have occurred if hit by a truck. 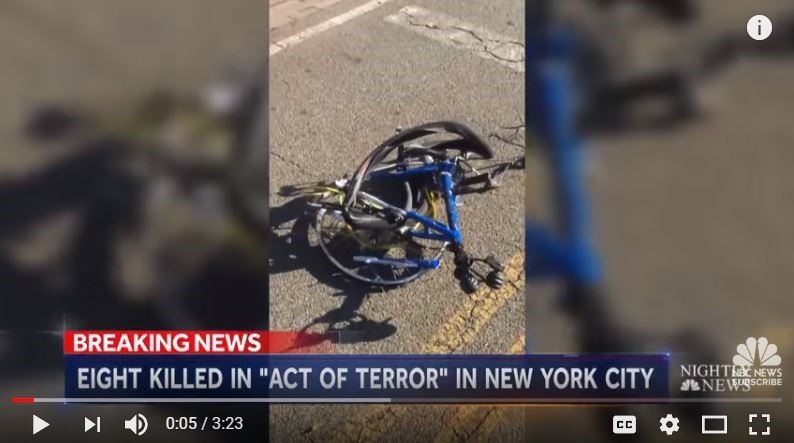 YouTube investigator Anaconda Malt Liquor has provided some footage of bicycles being crushed by a machine and run over by a tank, which look great compared to those on the bike trail mangled by Saipov.[4] 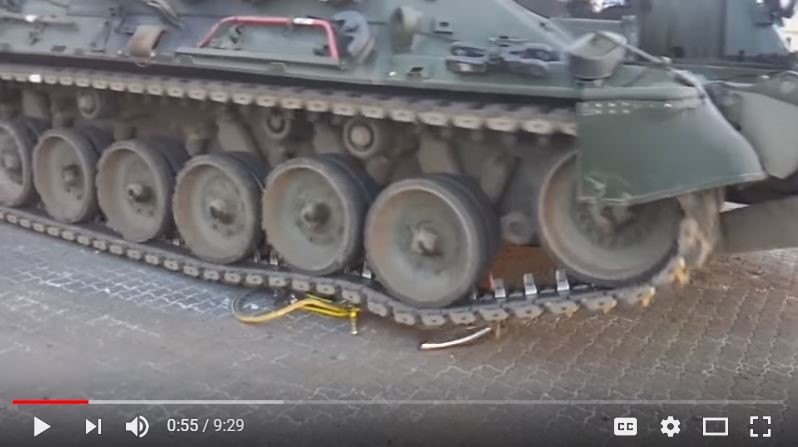 Bicycle being run over by a tank. Anaconda Malt Liquor 11. 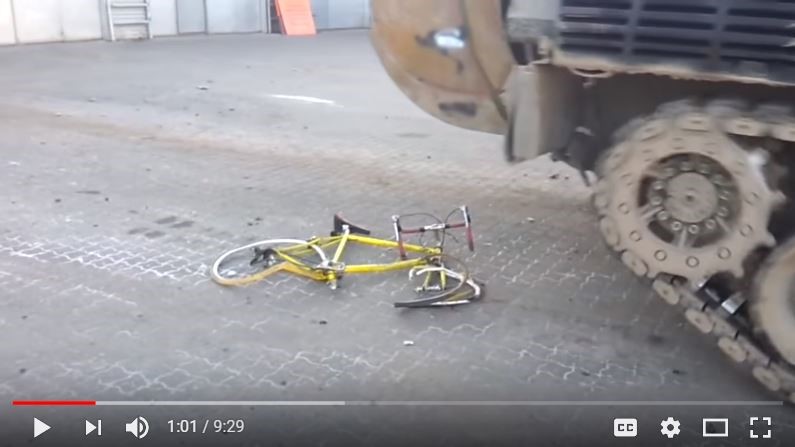 Same bicycle after being run over. Anaconda Malt Liquor 11.

Then there’s the bent sign post on the bike path—but how did Saipov’s truck do this strange kind of damage? 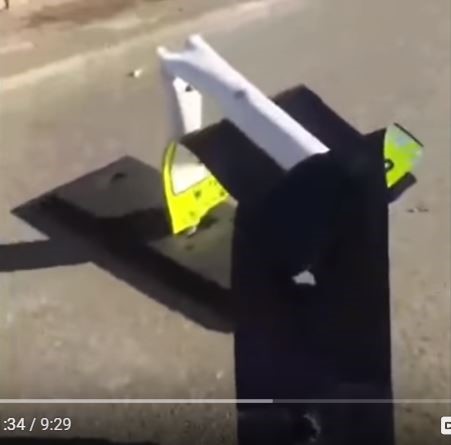 As for the victims, the alleged dead bodies were covered with white sheets, with no blood in evidence—although it was claimed by “eye witnesses” (crisis actors) and reported in the press that there was blood everywhere, and even “visible tire marks on the bodies of at least two of the victims crushed by the truck.”[5] As Hannity would say, “Really?” 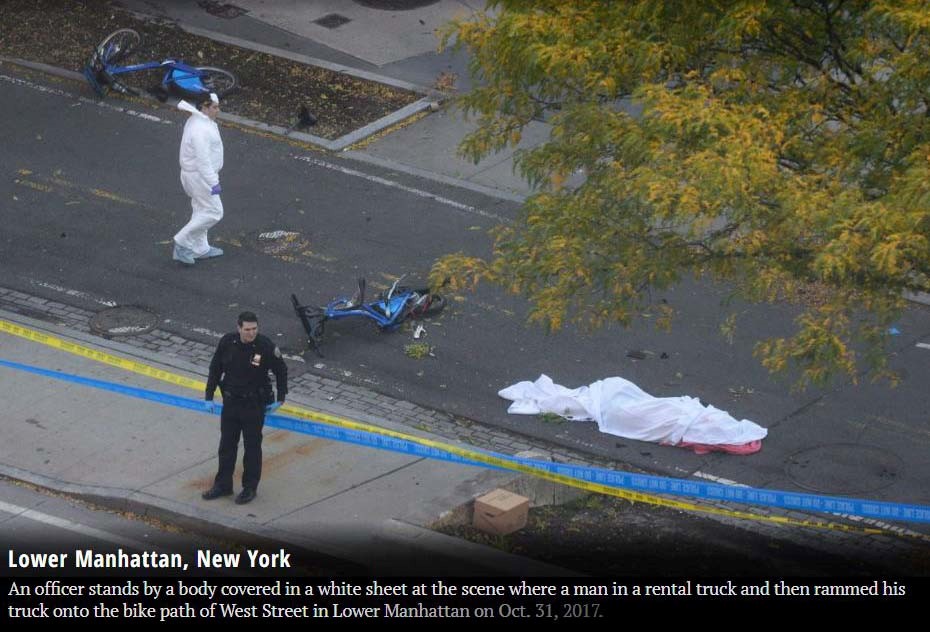 An officer stands near an allegedly dead body covered with a sheet, with no EMTs on the scene, and no trace of blood anywhere. Image: New York Daily News.

The injured were transported with great fanfare for the cameras, with a multitude of participants, suggestive of the old light-bulb jokes. 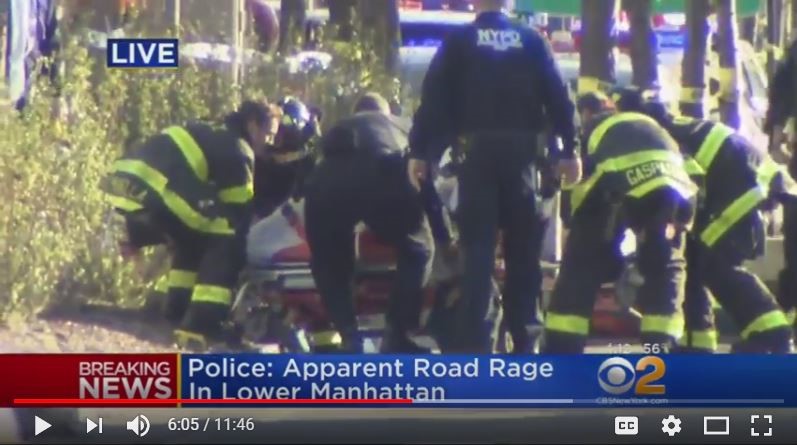 How many emergency workers does it take to move a stretcher? Image: CBS News.

Five of the dead were reportedly friends from Rosario, Argentina, who had made the trip to New York for their 30th high school reunion.[6] Of course they rented some bikes and hit the bike trail immediately once they were in the cultural capital of the western hemisphere—what else could they imagine doing? The group totaled eight men (three of whom survived), photographed in their LIBRE T-shirts—said to be a “joke” as they were traveling without their wives. Or perhaps I should say Photoshopped in their LIBRE T-shirts, since the image is a bizarre concoction of huge and small fellows, with odd-looking arms draped around each other in a way that could only be accomplished digitally. 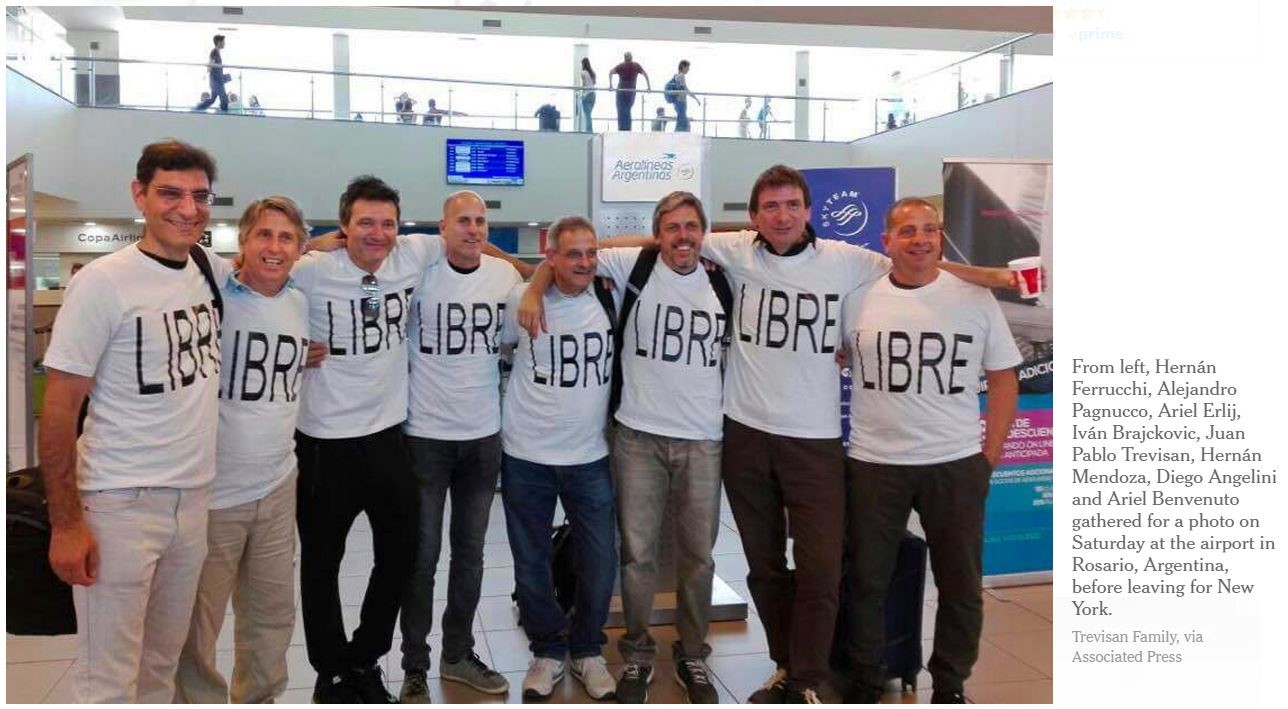 The other alleged dead included Ann-Laure Decadt, a tourist from Belgium; Darren Drake of New Milford, NJ; and Nicholas Cleves of Manhattan. So much easier to control the narrative when most of the dead are foreigners.

Meanwhile, ISIS has now claimed credit for the (fake) attack in its weekly Al-Naba newsletter, calling Saipov a “soldier of the Caliphate” who carried out the attack in response to their call to target “citizens of the Crusader countries involved in the alliance against the Islamic State.”[7] Saipov is said to have been planning the attack for the past year, in response to the al-Baghdadi video. According to the New York Times, Saipov had followed instructions in the November 2016 issue of the Islamic State magazine, Rumiyah, which called for truck attacks on “the enemies of Allah.”[8] 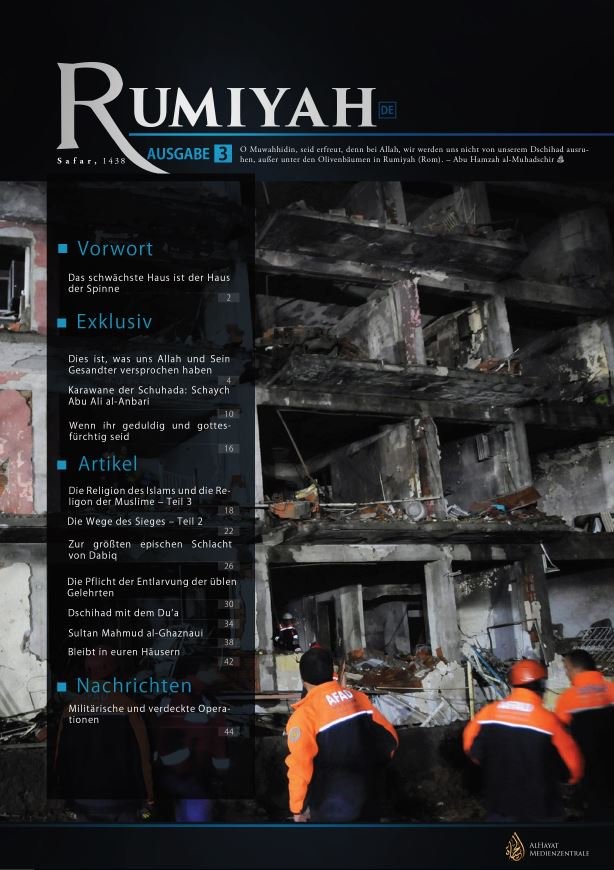 November 2016 edition of Rumiyah with instructions on vehicular attacks.[9]

The Times cites the following details: (1) the driver should continue to keep driving as long as possible and not exit the vehicle during the attack, (2) continue crushing the remains of the victims until it is no longer possible to do so, (3) then jump out of the vehicle with a secondary weapon like a gun or a knife, (4) write a note, including the phrase “The Islamic State will remain,” and (5) throw it out the window of the vehicle as the attack is being carried out. Bingo! Saipov carried out these instructions to a tee—or the perps who orchestrated the attack made sure it would look that way.

Those following the Islamic State will know that ISIS was—and is—a creation of the Western military alliance, including Israel, Saudi Arabia, and Qatar. The Islamic State was inserted into Syria and northern Iraq to give “us” an enemy to “fight,” with the primary goal of taking out Assad and taking over Syria.[10] So either way—fake attack or ISIS operation—WE carried out the New York Halloween massacre.

But, as is patently obvious, the official story of the New York attack is absurd. This was terrorism but not “Islamic.” It was a hoax, like all the rest of the post-9/11 attacks—meant to terrorize the citizenry, impose higher levels of “security,” and take away our rights. This includes deleting accounts from YouTube, subverting searches on Google, censoring books on Amazon, and firing tenured professors, in the guise of protecting us from bullying, hate speech, etc., but actually to quash our research on these cruel hoaxes. How disturbing that so many people—intel agents, politicians, government and corporate employees, academics, the courts, police, firemen, EMTs, doctors and hospital workers, the mainstream and alternative media, and paid crisis actors—are involved in the perpetration.

This article was published at JamesFetzer.org and MemoryHoleBlog.org.