THE STRANGE CRASH OF UKRAINIAN FLIGHT #752 IN IRAN 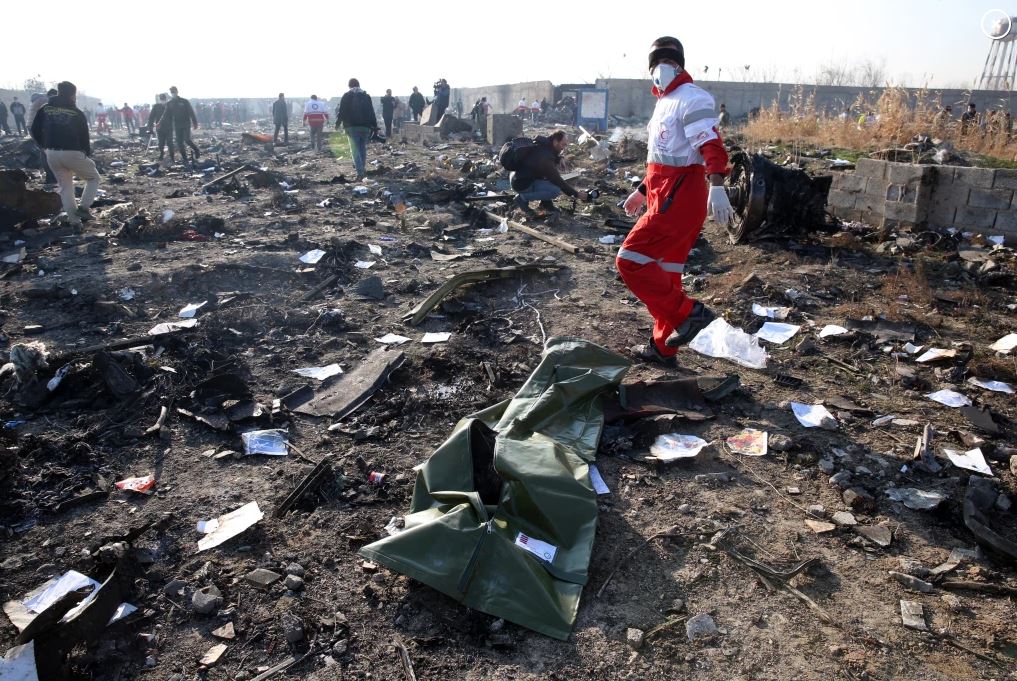 On the morning of January 8, 2020, a Boeing 737 crashed and left debris scattered over a wide area just minutes after takeoff from the Imam Khomeini International Airport in Tehran. The Ukrainian International Airlines jet was en route to Kyiv, scheduled to land at Boryspil International Airport at 8 am local time. “Amateur” videos posted on social media led to the suspicion that the plane had been brought down by a missile over the city of Parand.

The first video, posted on Instagram by The Rich Kids of Tehran, was taken by someone who just happened to be shooting up at the totally dark sky at the very moment the plane appeared and was apparently hit by something, resulting in its crash in a flaming fireball when it hit the ground. This recalls the luck of the Naudet brothers on 9/11. The New York Times obtained a high-resolution copy of the Rich Kids video and “verified” it, whatever that means.

A second video was posted, filmed from a car that was driving in the direction of the crash. A third video showed the plane flying in from the right, proceeding on a downward trajectory, and exploding in a huge fireball upon impact:

A CCTV video turned up, reportedly showing the last moments of the jet, or what remained of it, exploding in a passageway between two walls, raining burning debris and leaving small fires on the ground. Other videos of small fires circulated in the media, suggesting widespread burning and destruction.

There were 176 people on board flight #752 according to Wikipedia, including 9 Ukrainian crew members and two additional Ukrainians. The other passengers included, by nationality, citizens of Iran (82), Canada (63), Sweden (10), Afghanistan (7), and Great Britain (3). According to Prime Minister Justin Trudeau, who was outraged by the situation, 138 of the 167 passengers were traveling to Canada. At least one Canadian passport was recovered, miraculously, and it seems likely that there are others. Just like the passports of four of the alleged hijackers on 9/11. 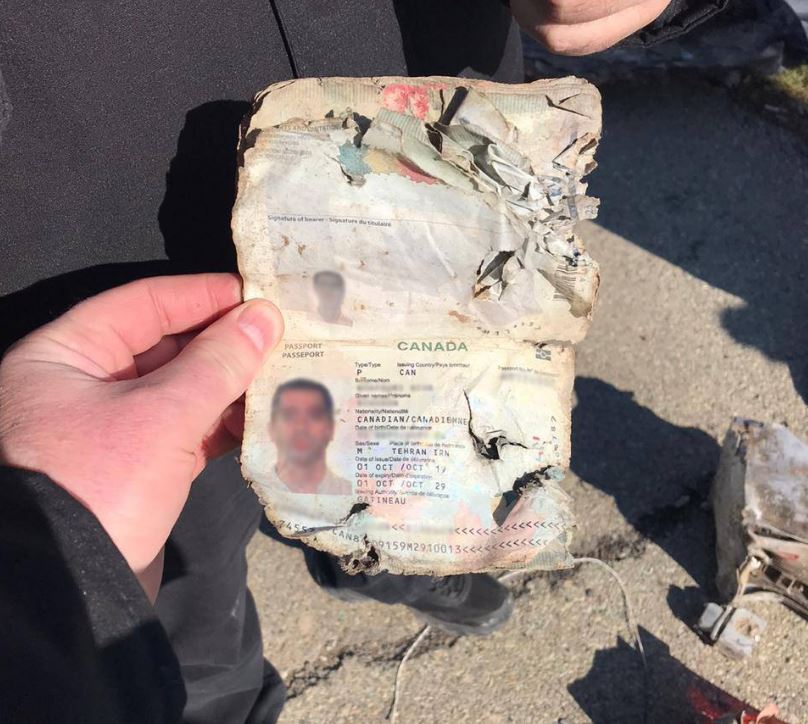 Canadian Passport. Image: Office of the President of Ukraine.

One does wonder why 138 people would travel from Tehran to Canada via Kyiv, but that is only one of many questions associated with this crash. Stranger still are the memorial programs for the Canadian victims that showed up in the media ON THE SAME DAY as the crash. Two that appeared immediately were produced by the CBC and the Vancouver Sun.

The CBC video, “Flight 752: A Canadian Tragedy,” is 45 minutes long and includes extensive reporting, dramatic commentary, and footage of the crash site, as well as the “stories” of the victims, with their full names, biographical information, candid shots, and professional black-and-white photos. The post is now dated January 9, but it was up on January 8. Even considering the time difference between Canada and Iran, it must have taken a cast of thousands working feverishly to compile the information and images and produce the programs so quickly. Unless they had advance notice.

Curiously, relatives and friends of the victims appear in the memorials, some looking barely distressed and even smiling, speaking to reporters ON THE SAME DAY their loved ones died, instead of choosing to grieve in private. One thinks of the cheerful interview of Chris and Lynn McDonnell by Anderson Cooper right after their daughter Grace was supposedly killed at Sandy Hook Elementary by Adam Lanza.

The crash site is also problematic. Debris is strewn over a wide area, with little of it burned. Very few parts of the plane are visible in the news footage, although most of it should have been recovered. The Boeing 737-800 has between 162 and 189 seats, but not a single airplane seat is seen in the footage. 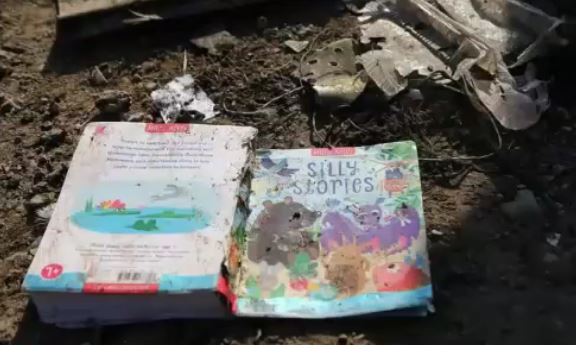 A few pieces of luggage show up, but nowhere near the amount there should be, and papers, water bottles, photo albums, and children’s books survived. And we do have shoes, lots of single shoes – the hallmark of hoax events worldwide. 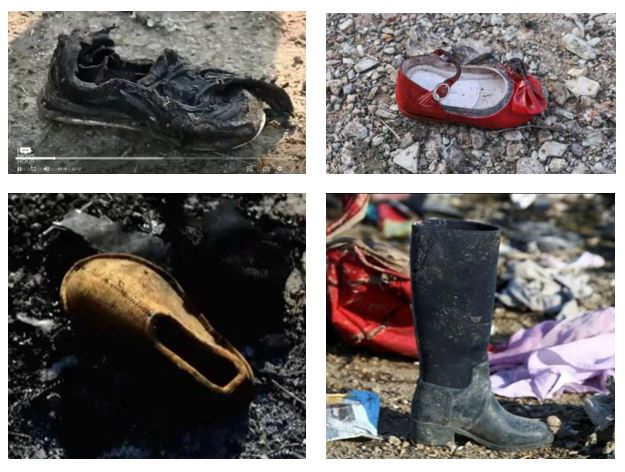 Pieces of debris look dropped at the site, and where they are close to a wall, the wall is not damaged. 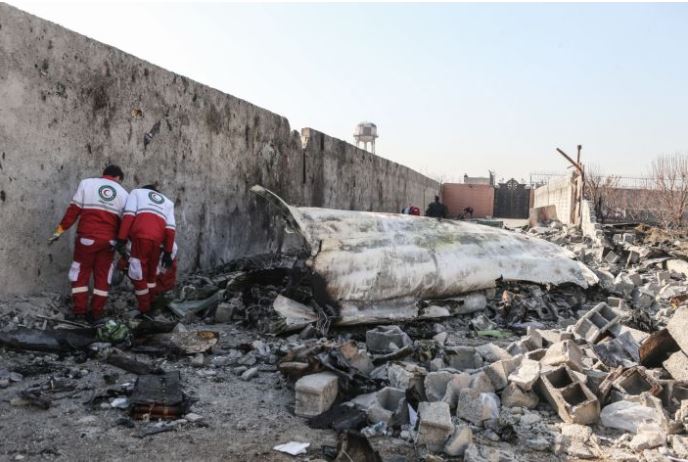 The tail usually survives in a plane crash, but only the tip shows up here, and it looks like it was set down carefully in a tilled field, with the rows undamaged by any kind of impact. 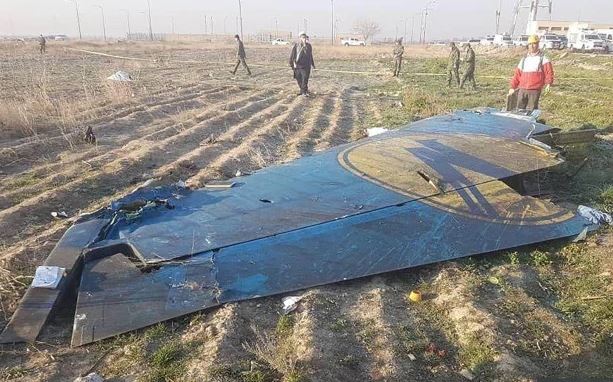 The theory that the plane was shot down by a missile (or two missiles), which supposedly exploded before actually hitting it, is said to be substantiated by a missile part found at the crash site. This is allegedly a piece of a Tor-M1 missile, found in the yard of a home in the city of Parand, although this is unverified. 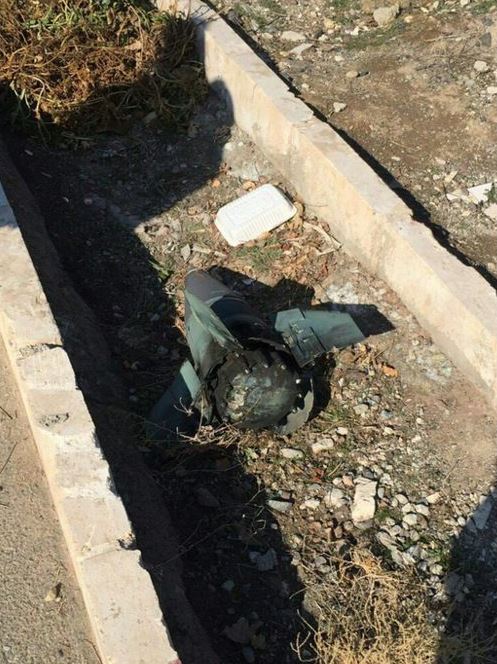 It seems that a missile may have been involved, although not to shoot down the airplane. This was discovered by Jeffersonian Girl who has posted several videos on the crash at 153news.net. She is an expert on jet fuel and a designer of fuel farms for airports. The Boeing 737-800 uses Jet A fuel, WHICH DOES NOT EXPLODE. The plane would have broken apart on impact, and fires may have resulted, although the high flashpoint of jet fuel reduces the potential for a post-crash fire. But the plane would not have exploded in a massive fireball.

One of the “amateur” videos, the “third video” posted above, allegedly shows the plane coming in from the right on a straight downward trajectory, hitting the ground in an exploding burst of light. If this video is real, it actually shows a missile and not a Boeing 737. The CCTV video, if real, further indicates that a missile hit the ground and not flight #752. This is all made clear in Jeffersonian Girl’s informative presentation.

None of the “amateur” videos can be assumed to be authentic, just as the stories in the media cannot be trusted. Taken together, however, the evidence points not to a plane crash but to a fake event, perhaps involving a missile, with loads of debris trucked in and deposited for the cameras.

This is further indicated by the lack of a proper investigation of the crash site and the hasty clean-up, which has been blamed on Iran. What about all those people walking around the area and gathering things up, and what about all the body bags? News footage shows many of these bags being carried away from the scene and, in a few cases, being filled with items picked up off the ground. Some of these people are not even in uniform, while others are from the Iranian Red Crescent, an NGO under the aegis of the International Red Cross. As with other deep-state events, local officials are involved, and the cover-up is part of the operation. 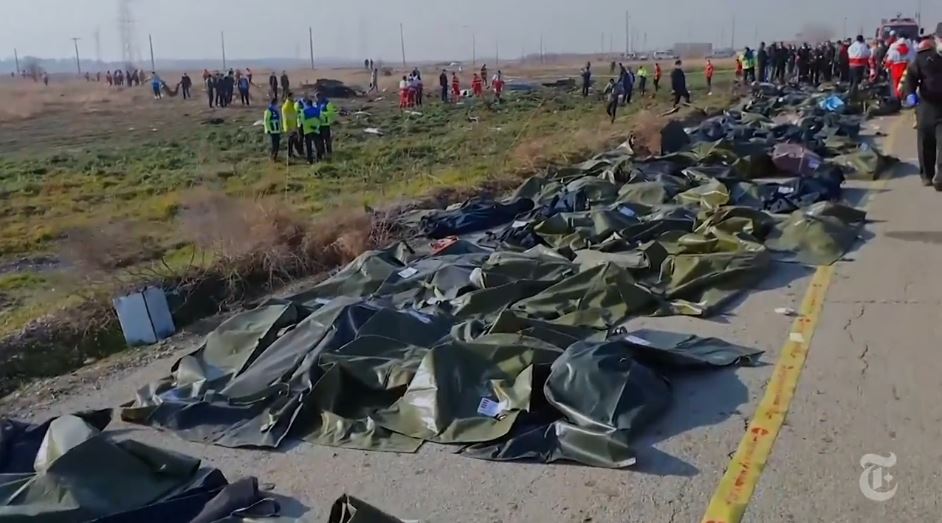 Body bags at the site of the crash of flight #752, filled with junk from the debris field. Image: New York Times.

Officials in the U.S., Canada, and elsewhere suggested that the Iranians had shot down the plane, although they conceded that it may have been accidental. Iran said that this was “a big lie,” “psychological warfare,” and “scientifically impossible.” After holding out for three days, however, the Iranians knuckled under and took responsibility, admitting that they had shot down the jet by accident. Iranian Foreign Minister Mohammad Javad Zarif apologized in a tweet. 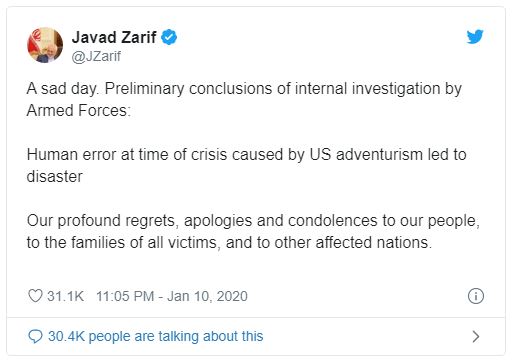 The admission gave rise to protests against the government, with shouts of “Khamenei is a murderer!” as reported by The New York Times. On January 13, The Times was reporting that “at least several people had been shot in the back by security forces, according to witnesses and videos.” Since one cannot believe anything that appears in The Times, it is unclear if this is true. But it further demonizes Iran, and it makes a good story.

So Iran has allegedly shot down a plane full of civilians, killing 176, and is murdering its own people in the streets. And all this stemmed from Trump’s drone strike on Qasem Soleimani on January 3, according to the media. The neocons are pleased, with Iran diminished and on the defensive, with Soleimani dead, and with Trump cast as the culprit. But was Trump really the main instigator? 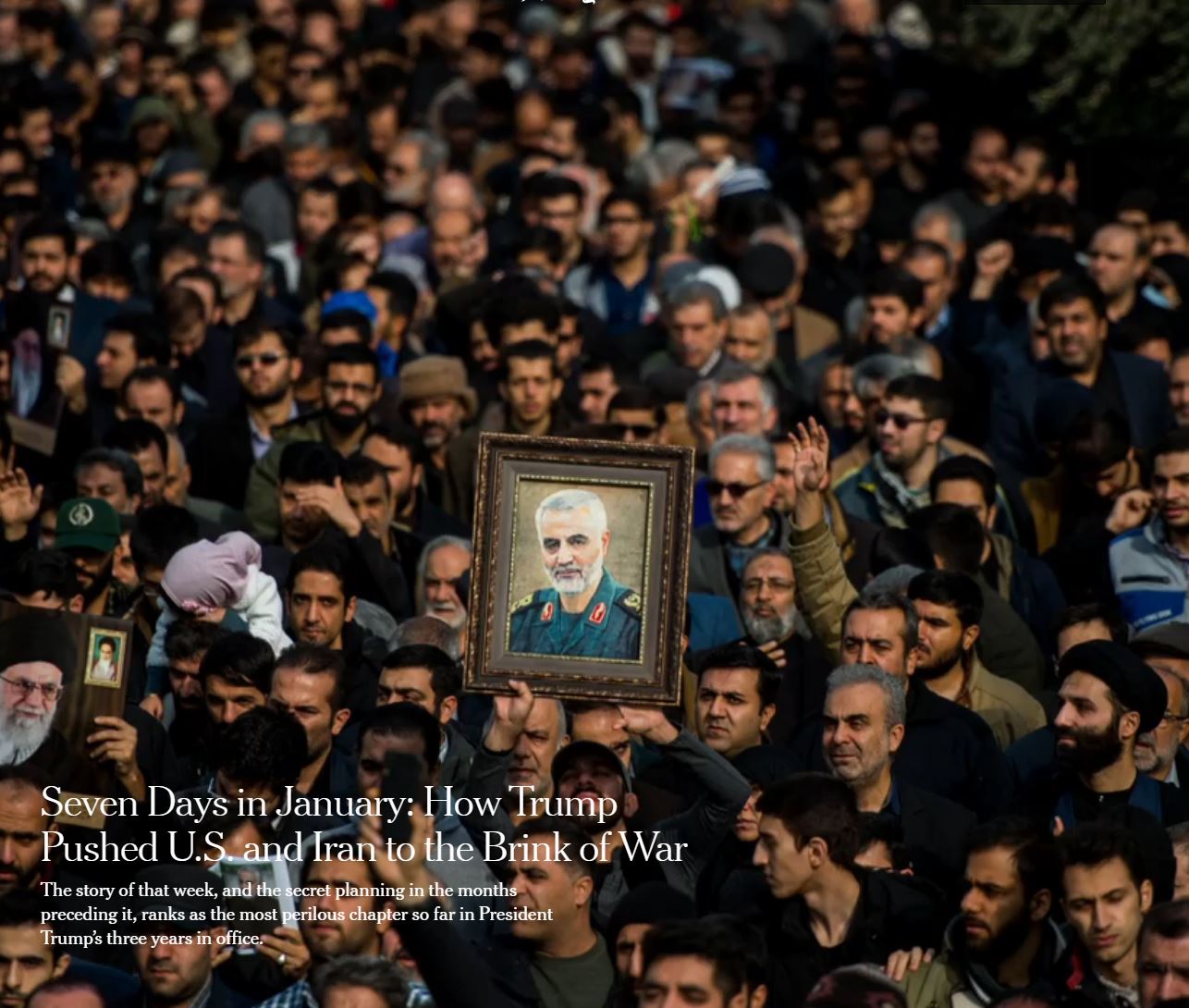 In a two-page spread on Sunday, January 12, The Times published a story claiming that he was indeed at fault: “Seven Days in January: How Trump Pushed U.S. and Iran to the Brink of War.” This is an amusing title, referring to “Seven Days in May,” a 1964 film (based on a 1962 book) about a planned takeover of the U.S. government by a military/political cabal displeased with the fictional President’s disarmament treaty with the U.S.S.R. – that is, with the President’s wish to avoid war and commit to disarmament instead.

That is pretty much what is happening now, with Trump wanting to end the endless wars, and the neocons and their sponsors – Israel chief among them – hoping to keep the wars going and finish up by attacking Iran. The list of authors of “Seven Days in January” reads like a Who’s Who of CIA journalists:

One should remember that Soleimani has been in the sights of Israel and its operatives for years. He was instrumental in Iran’s support for Hezbollah in 2006, and he reportedly worked with Hezbollah in 2010 to strike at Israel. In 2015, Barack Obama allegedly warned Soleimani about an assassination plot by Israel, although by 2018, Israel was supposedly given “the green light” by U.S. officials. Benjamin Netanyahu has campaigned tirelessly for war against Iran, on the pretext that it is developing nuclear weapons. 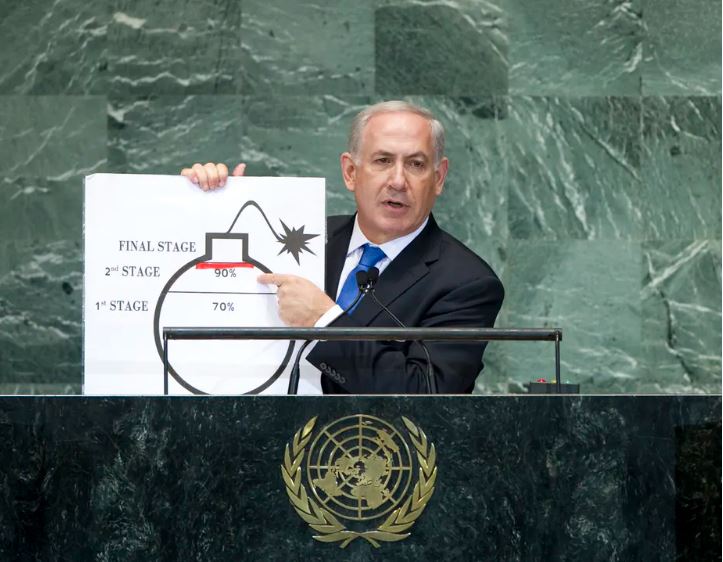 Netanyahu at the UN in 2012, telling the General Assembly that Iran was close to building a nuclear bomb.

Although Netanyahu has distanced himself from the assassination of Soleimani, calling it “an American event,” Israeli sources are reporting that “the Jewish state was involved in the January 3 operation, handing the Americans key intelligence details.” The Times reports that Mike Pompeo briefed Netanyahu in advance about the plan to kill Soleimani, and that he was the only non-U.S. leader who knew about it beforehand. Some have speculated that the assassination was carried out by the CIA and Mossad. Did Trump really give the order?

This brings us back to the crash of flight #752. If this was a staged event and not a real plane crash, which is all but certain, who was capable of carrying out such a huge operation – and who benefits? According to the media, we are now very close to a war with Iran. General Hossein Salami, commander-in-chief of the Iranian Revolutionary Guards, apologized for the downing of the jet but added, “We are at war with the United States. We do not consider the conflict over.” The U.S. does not benefit from a war with Iran – nor does Trump, as this would only alienate his supporters and add to his current problems. His defeat in 2020 is already being predicted by the media, due to the situation in Iran.

But one country does benefit from the assassination of Soleimani and the staged plane crash, and that is Israel. While one might think that the crash of a Boeing 737 and the deaths of 176 passengers would be impossible to fake, one should remember the attacks of 9/11. Four passenger planes were said to have crashed into WTC 1 and 2, the Pentagon, and the ground at Shanksville, killing the crews and passengers – although none of this actually happened. The false-flag attacks of 9/11 were engineered by Israel and its accomplices, including many traitors in the U.S. government. Like those attacks, the crash of flight #752 was an orchestrated event on a grand scale, involving an airplane and killing no passengers – calculated to keep America fighting for the Zionist Project.

So what induced the Iranians to take responsibility for downing the Ukrainian jet, when they knew the crash was “scientifically impossible”? As the media saying goes, the situation is still developing.

VIVIAN LEE is the nom-de-plume of a tenured professor at an east coast university.

This article was published at JamesFetzer.org.