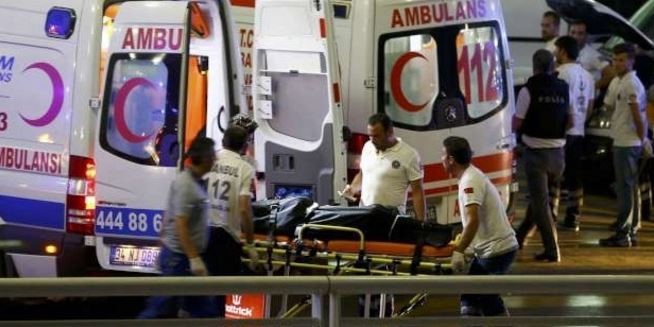 Photo of emergency workers loading a body bag into an ambulance after the June 28 attack at the Istanbul Airport. Image: ABC.

In a stunning turnaround, the Istanbul Ataturk Airport opened for business at 2:20 am local time on Wednesday June 29, after the alleged triple suicide bombing that began at 9:50 pm the night before. In a little over four hours, the airport was able to clean up all the blood and body parts that would have resulted from the mass shooting and three bombs that were said to have been detonated.[1] At present, the death toll is reported at 42, with 239 injured.

This would be a Herculean feat, requiring hundreds of specialized workers trained in biohazard cleanup, outfitted in safety gear, and utilizing highly technical equipment under specific protocols – in order to deal properly with the hazardous waste. According to the World Health Organization, both “infectious waste” and “pathological waste” are considered hazardous and require special treatment. These include “waste contaminated with blood and other bodily fluids, …waste from autopsies, …human tissues, organs or fluids, body parts” and various pharmaceuticals and toxic materials.[2]

However, nothing of this sort is seen in any of the photos or videos said to record the events following the attack. Also not seen is the tremendous amount of blood that witnesses report. This curious phenomenon is typical of other “mass shootings” and “terrorist attacks” such as the recent “massacre” at the Pulse nightclub in Orlando, Florida.[3] 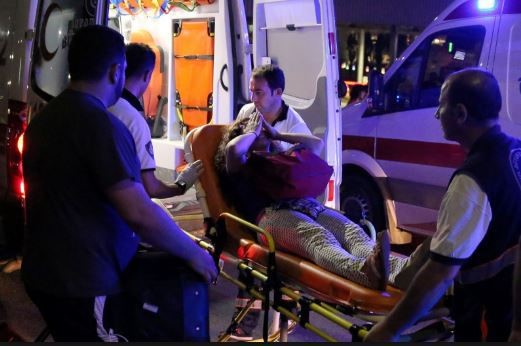 One of the many Istanbul victims who do not show any visible signs of injury or blood. Image: New York Times.

According to Diana Eltner, 29, a Swiss psychologist who was flying through Istanbul:

There were little babies crying, people shouting, broken glass and blood all over the floor. It was very crowded, there was chaos. It was traumatic.[4]

Judith Favish, who was heading to South Africa, said she had seen “blood everywhere near the entranceway.” And in the words of Eylul Kaya, 37, who was with her one-year-old child:

There were blood splatters everywhere. I covered my boy’s eyes and we ran out.[5]

However, there is very little blood to be seen in the images released. This includes the expanse of floor that surrounded one of the alleged attackers, who was supposedly downed by a shot from the authorities, seen in a video seconds before he blew himself up.[6] 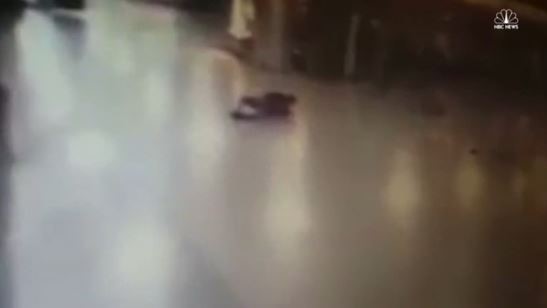 Screen shot from a video showing one of the alleged attackers, supposedly felled by a policeman’s bullet, seconds before blowing himself up. Image: NBC.

The absence of blood surely made the clean-up easier. In fact, it seems to have been very straightforward. According to a ludicrous statement by CNN:

As passengers at Istanbul’s Ataturk Airport waited to board their flights Wednesday, workers picked up shattered glass and washed away blood that was barely dry.[7]

Many more anomalies have emerged, such as confusion regarding the location of the shootings and bombings in the airport, reports of up to seven attackers, and conflicting accounts by witnesses, most of whom say they did not actually see the attacks. Some witnesses confirmed the story, however, such as Paul Roos, 77, from South Africa, who said he saw one of the gunmen “randomly shooting” in the departure hall from a distance of 50 meters:

He was wearing all black. His face was not masked… We ducked behind a counter but I stood up and watched him. Two explosions went off shortly after one another… He turned around and started coming toward us. He was holding his gun inside his jacket. He looked around anxiously to see if anyone was going to stop him and then went down the escalator… We heard some more gunfire and then another explosion, and then it was over.[8]

A brave man, Paul Roos, and a lucky one indeed. 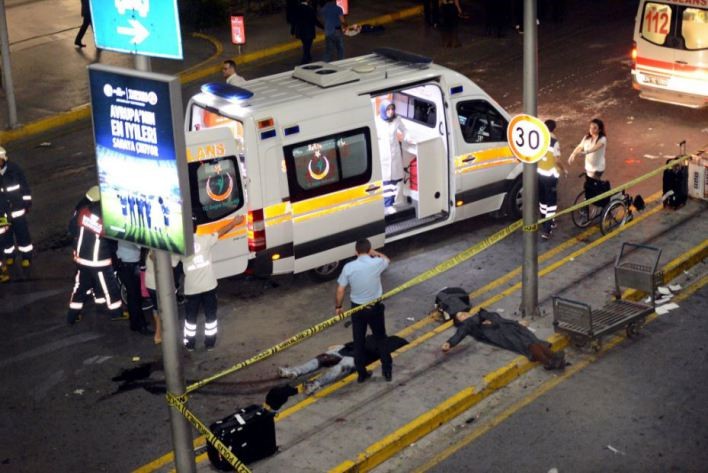 Dead or injured victims at the Istanbul Airport, lying on the ground, while emergency workers do nothing to help them. Image: New York Times.

Supposed victims are seen lying around, with no one attending to them or rushing them to the hospital. This weird concept is found in other recent “terrorist attacks” in the US and abroad, including the Brussels Airport “massacre” of March 22, 2016, with which this new attack has been compared in the media. Not only are the victims unnoticed and unrealistic, but in both cases the gunmen arrived at the airports via taxi, and the most pronounced visual evidence is not the sight of “carnage” but the proliferation of ceiling tiles and shattered glass. 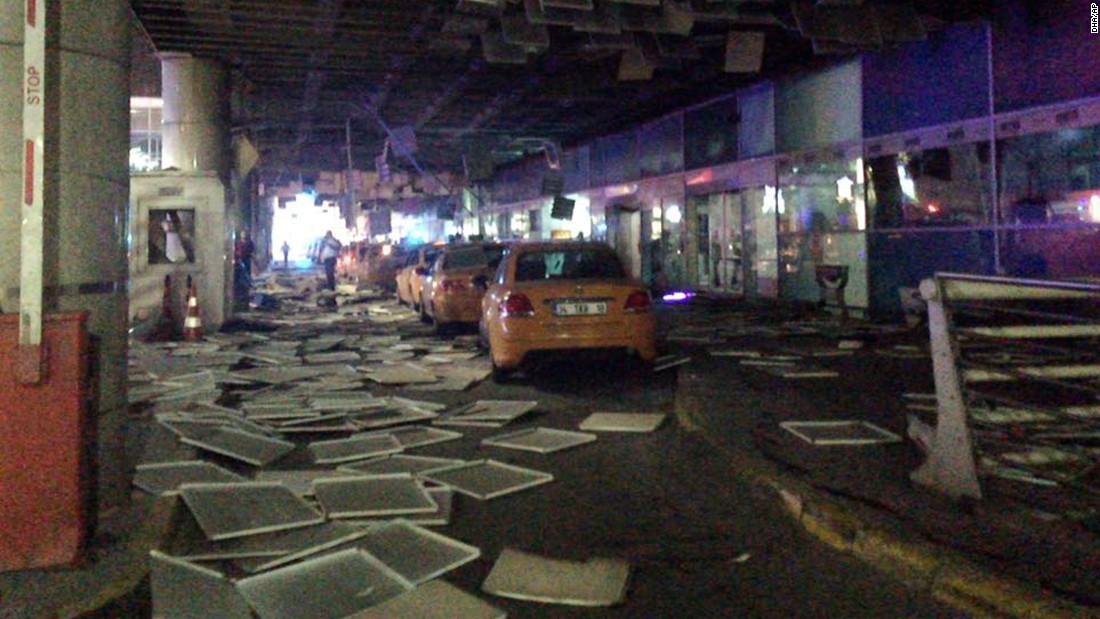 An entrance of the Istanbul Airport with ceiling tiles on the ground. Image: Sidney Morning Herald.

The attack on the Brussels Airport has been analyzed and deemed a staged event, used to incriminate ISIS and strike fear into the populace over the westward advance of “Islamic jihad.”[9] The new Istanbul attack is being pinned on ISIS as well, and shows every indication of being staged for the same purpose. Although there is no real evidence for the accusation, former US Ambassador to Turkey (and Iraq), James Jeffrey, has no doubt. Making the rounds of the networks, Jeffrey has called for more boots on the ground, and more support, for the battle against ISIS in Iraq and Syria.

This is almost certainly an ISIS attack. The sophistication of it, the selection of a target, an international terminal, the use of suicide bombers – that has all of the earmarks of ISIS. They’ve launched four attacks in Turkey over the last year. They’re ever more at odds with the Turkish government. And I’m almost certain that when this all clears out, we’ll point the finger at ISIS…[10]

But this points the finger at the US and its allies, who fund and control the Islamic State.[11]

This article was published at MemoryHoleBlog.org and JamesFetzer.org.

[3] “From Orlando to Charleston – Witnesses ‘Smell the Blood.’” https://vivianleeposts.com/2016/07/17/from-orlando-to-charleston-witnesses-smell-the-blood/

[9] “The Dark Truth behind the Brussels Attacks.” https://memoryholeblog.org/2016/03/27/the-dark-truth-behind-the-brussels-attacks/