The US news media is gearing up for the 15th anniversary of the 9/11 terrorist attacks with a diverse and perverse set of offerings to bolster the official story. None is stranger than the release of “I Kinda Like It When A Lotta People Die,” which George Carlin recorded on September 9-10, 2001, for an HBO special that would have been aired in November but was shelved after the attacks – since it “seemed in bad taste after nearly 3,000 people were killed a day later,” according to a story in the New York Times this week.[1]

Carlin, the brilliant comedian and brutally honest social critic, died at the age of 71 in 2008; he was posthumously awarded the Kennedy Center’s 2008 Mark Twain Prize for American Humor.[2] Despite Carlin’s anti-establishment bent, you don’t get big awards without friends in high places. 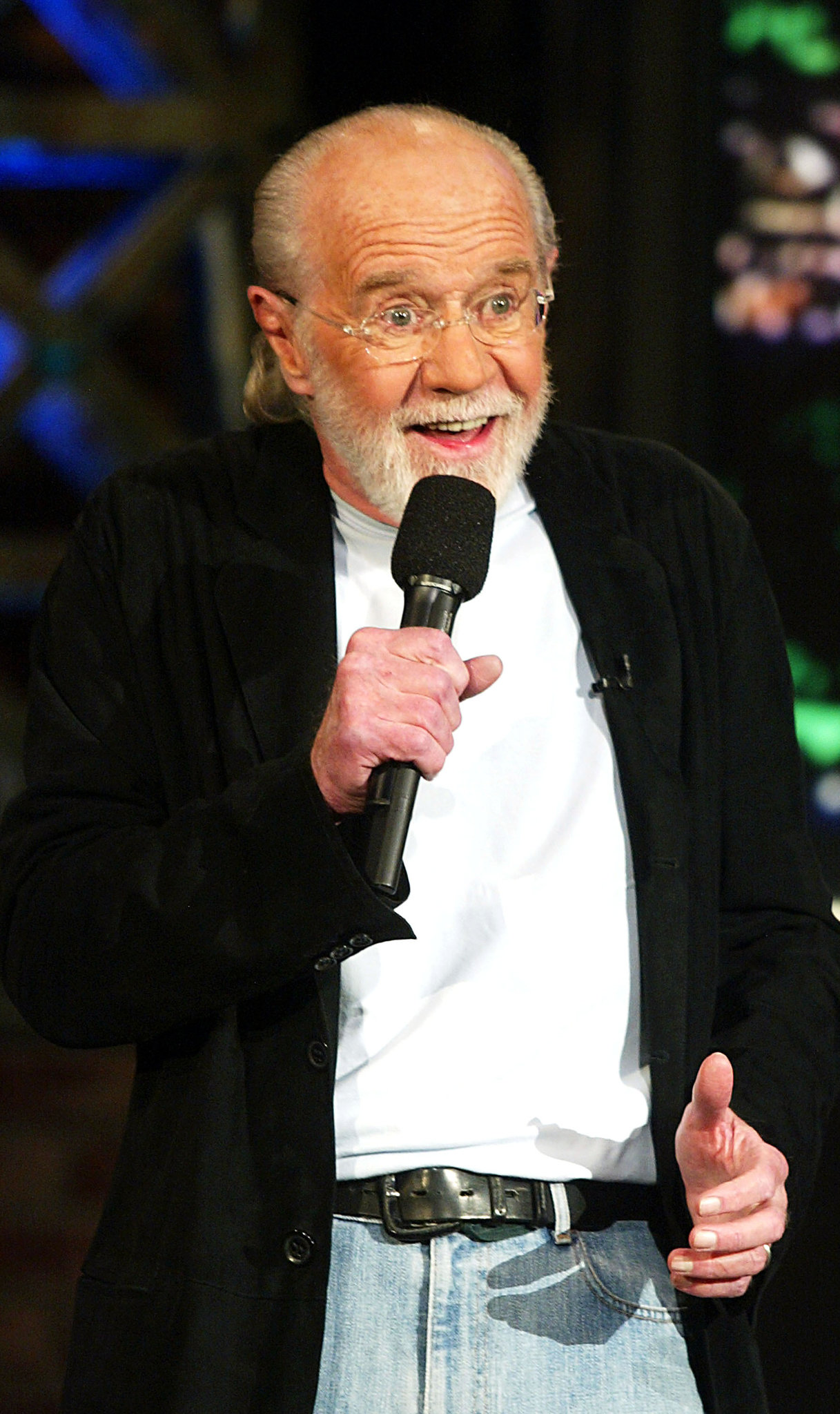 “I Kinda Like It” is set for release on September 16, 2016, and can be pre-ordered at amazon or GeorgeCarlin.com (download, CD, or vinyl). But for those who can’t wait, it has been available on SiriusXM, Channel 400 (Carlin’s Corner) since September 1.[3] Mocking the public’s fascination with disaster scenarios, Carlin says he enjoys mass destructions where lots of people die – such as tornadoes, hurricanes, earthquakes, tidal waves, volcanoes, monsoons, forest fires, avalanches, heat waves, famines, and, his favorite disaster, “an asteroid.”

“I’m always rootin’ for a really high death toll,” he says. “That’s why I like the natural disasters … that no one can control.” According to Carlin, “the world is one big theatrical production.” In the face of mass tragedy, “folks, you gotta have fun.”[4]

Not only that, but he includes a joke about “a fart so potent it blew up an airplane,” according to the Times. “You know who gets blamed? Osama bin Laden,” he says. “The FBI is looking for explosives. They should be looking for minute traces of rice and bok choy.”[5] A preview/trailer is available on YouTube, which does not, however, include the bit about bin Laden.[6]

“I Kinda Like It When a Lotta People Die,” album preview.

Not too many people were riffing on Osama bin Laden on the eve of 9/11, although the media jumped on board the next morning with reports of terrorist attacks – and Ehud Barak, former Prime Minister of Israel, pinned it on Osama the same day in a BBC interview. One can see why Barak would speak up, since Israel was one of the perpetrators. Neocon L. Paul Bremer also named bin Laden that day on NBC, but he too was in on the scam, as the future “proconsul” of Iraq after the 2003 invasion.[7] But why was George Carlin thinking about bin Laden – in the context of mass casualties – on September 9-10? It seems he knew what was going to happen.

The “lost special” was reworked and replaced after two months with a new HBO special, “Complaints and Grievances.” The new version was nominated for a Grammy in 2003. Was Carlin brought around after his indiscretion?

“I Kinda Like It” was deemed suitable for release by Carlin’s daughter Kelly, after it was located in the Carlin archives.[8] But why now? Perhaps because we can handle it, 15 years later, as the Times explains:

Today, we have a more accelerated news coverage and politicized comedy scene. No one canceled a late-night show after the June attack on a nightclub in Orlando, Fla., and the sober way talk-show hosts speak after national tragedies has hardened into something like ritual, a part of the job.

That’s funny. No one canceled a talk-show after the Orlando attack, because everyone knew it was fake.[9]

Or is the Carlin special being pulled out to ramp up the level of cognitive dissonance already plaguing our society, in order to tamp down the fact that a good portion of the world’s populace now knows that 9/11 was a false-flag enterprise?

Unfortunately Carlin is not alive to comment on the coverage, although he may be turning over in his grave. According to the Times’ cynical interpretation of his “operatic yarn”:

One way to see it, though, is as a sendup of the terrorist mind-set that led to the attack on the World Trade Center and other sites that day, a biting take on an extremist view that imagines that a twisted form of deliverance will come from violence and hate. Seen from a certain angle, a story once too provocative to release might be the perfect example of comedy in the post-Sept. 11 world.

Other anniversary coverage is more typical fare, straight propaganda calculated to support the official version, such as the moving story of Robert Franz, a guide at the Flight 93 National Memorial near Shanksville, Pennsylvania. 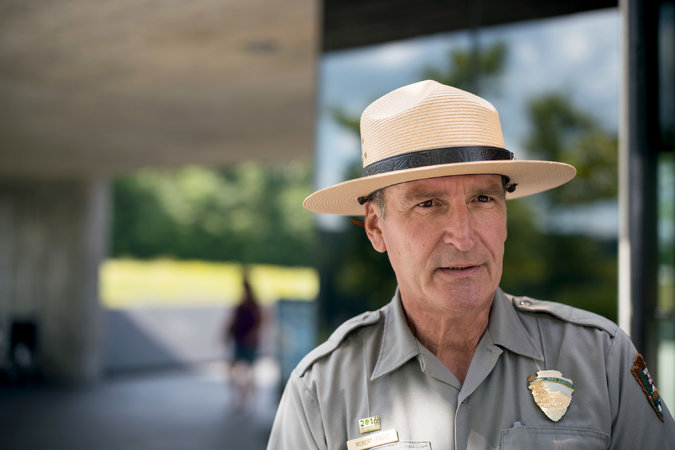 Franz, according to the Times, is an “interpretive park ranger,” whose job is “to tell the story of what happened in that color-dappled field behind him, again and again and again.”

Helping some to remember what we already know. Helping others, especially those who were not yet born, to envision a beautiful, calamitous day now nearly 15 years in the past.

He tells the visitors the official story of United Airlines Flight 93, with all the requisite components, ending with the plane crashing “at 563 miles an hour into the soft, strip-mined earth, killing all.” Despite the complete lack of evidence for a plane crash in Shanksville, Franz must know what he is talking about – he was a military pilot who spent “the better part of two decades flying Army Hueys and Black Hawks.” He takes questions as well, “and keeps his counsel as conspiracy theorists question whether such a crash even occurred.”[10] Luckily there are people out there like Robert Franz to reassure us.

So for this year’s anniversary, we have comedy, we have pathos, and we also have museum-quality documentation. The National September 11 Memorial Museum has issued a new commemorative volume, No Day Shall Erase You: The Story of 9/11 As Told at the National September 11 Memorial Museum.[11] It will not be lost on the reader that the word “story” is the operative term in all these, well, stories. 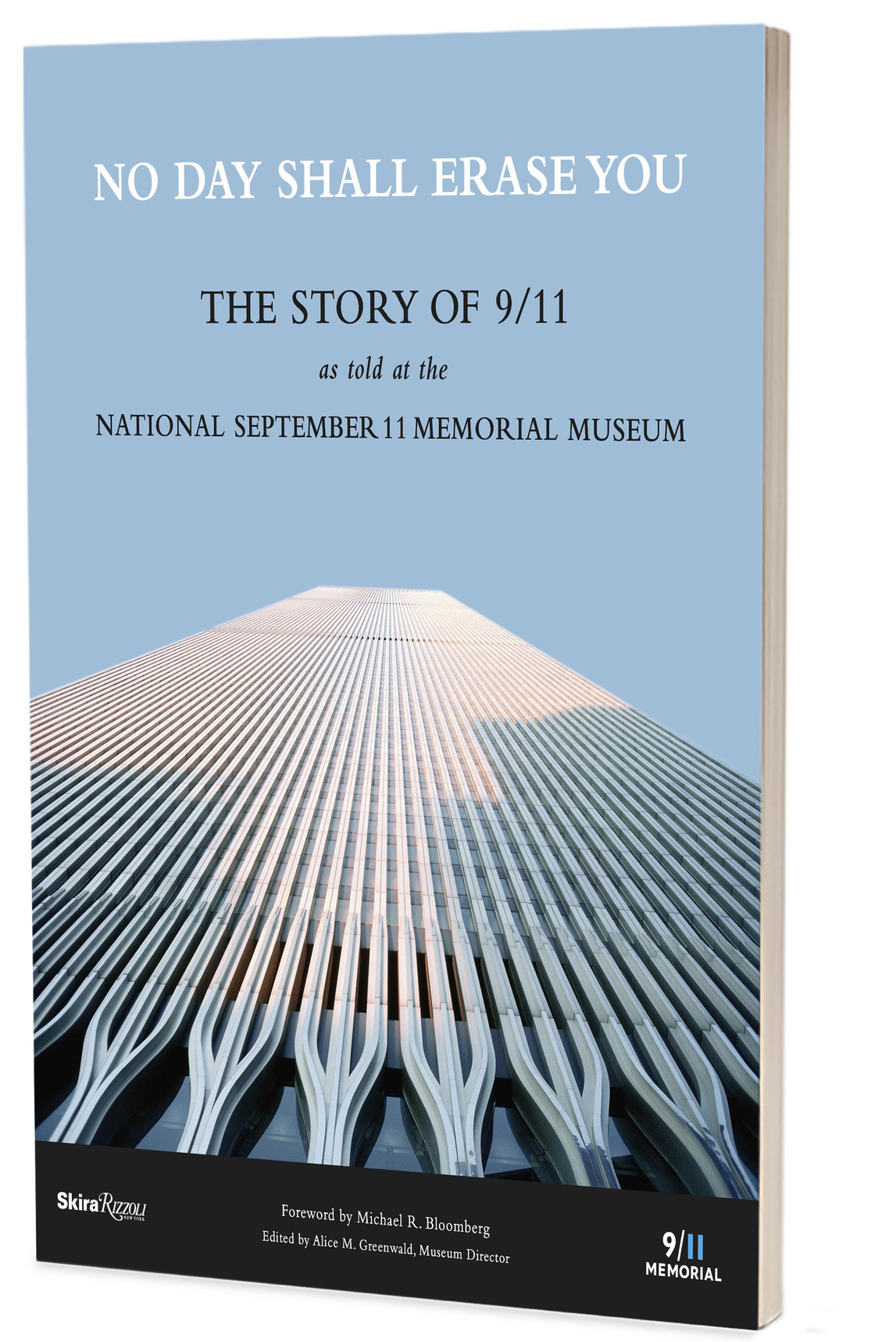 No Day Shall Erase You, 2016. Image National September 11 Memorial Museum.

Edited by Alice M. Greenwald, the director of the museum, the book “is both a memorial and a celebration of survival, courage, endurance and resilience, made all the more poignant because, unlike so many other museums, it is site specific.”

Like visitors to Pearl Harbor, where sailors are still entombed and where oil still bubbles to the surface from the submerged battleship that is part of the USS Arizona Memorial, people at the museum can stand at ground zero, where the terrorist attack took place. Even readers, while paging through this book, can feel themselves inescapably transplanted there.[12]

How appropriate to compare the attack on Pearl Harbor to the 9/11 attacks, since they were the “new Pearl Harbor” called for by the Project for the New American Century in their 2000 report, Rebuilding America’s Defenses.[13]

All this coverage includes prominent nods to the 9/11 “conspiracy theorists” and those in the know about what did and did not occur on that day. One might take this to be a good sign – that the “truthers” are now so numerous, and the amount of viable information available in print and online is so vast, that the opposition to the official “story” must be acknowledged by mainstream sources. One recent book, America Nuked on 9/11: Compliments of the CIA, the Neocons in the DoD & the Mossad, gives an up-to-date account.[14]

Yet the propaganda continues in ever more devious and creative forms, and far too many people are taken in. One wonders what George Carlin would say in 2016 about the 9/11 theatrical event – and the mass destructions that have followed.

Vivian Lee is the nom de plume of a tenured professor at an east coast university.

This article was published at MemoryHoleBlog.org.

[5] “The Fecal Differential,” from “I Kinda Like It When A Lotta People Die.”

[6] “George Carlin – I Kinda Like It When A Lotta People Die – Album Preview.” https://www.youtube.com/watch?v=FHu31WUUih0.

[8] “The Day before 9-11 George Carlin Recorded a Comedy Special; It Never Aired – Until Now.” http://thefreethoughtproject.com/9-11-george-carlin-cd-release/.

[13] “Further, the process of transformation, even if it brings revolutionary change, is likely to be a long one, absent some catastrophic and catalyzing event – like a new Pearl Harbor.” Rebuilding America’s Defenses, section V, “Creating Tomorrow’s Dominant Force.” http://www.informationclearinghouse.info/pdf/RebuildingAmericasDefenses.pdf.

[14] Jim Fetzer and Mike Palecek, eds. America Nuked on 9/11: Compliments of the CIA, the Neocons in the DoD & the Mossad. http://moonrockbooks.com/america-nuked-on-9-11/.