PRESIDENT DONALD TRUMP: THE ART OF THE DEAL

I don’t do it for the money. I’ve got enough, much more than I’ll ever need. I do it to do it. Deals are my art form. Other people paint beautifully on canvas or write wonderful poetry. I like making deals, preferably big deals. That’s how I get my kicks. 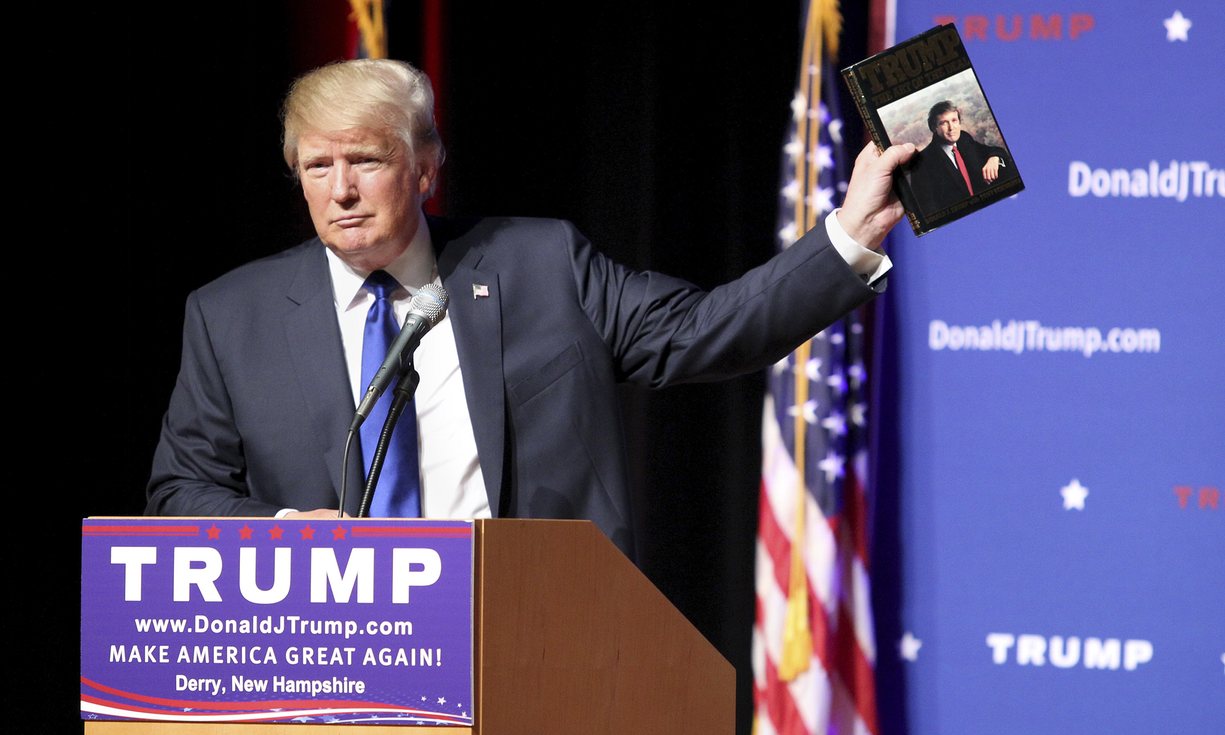 Donald Trump with his book, The Art of the Deal. Image: The Guardian.

The stunning win by Donald J. Trump in the November 8th U.S. presidential election took many by surprise, since Hillary Clinton was the chosen candidate. Everyone seemed to think that Clinton would win – either legitimately or in a rigged election. News coverage favored Clinton by a wide margin, and the only major network to give Trump a break was Fox News.[1] Most polls predicted that Clinton would win the presidency, with her odds of winning put as high as 85% and Trump’s as low as 35%.[2] The pundits are now asking how they all got it wrong.[3]

Blame is being placed on “the e-mail scandal,” with James Comey’s letter of October 28 to the U.S. Congress refocusing attention on Clinton’s private e-mails just 11 days before the election.[4] FBI Director Comey reopened the investigation after another 650,000 e-mails were found, this time on the laptop of Anthony Weiner, husband of top Clinton aide Huma Abedin. The laptop was confiscated by the New York Police Department (NYPD) and turned over to the FBI. On November 6, Comey caved to pressure, announcing that no charges were warranted, but some said the damage had been done.[5]

Election night was a long, drawn-out affair, with final results not in until 2:40 am on Wednesday. The television networks “called” the electoral vote in the states, a notoriously undemocratic way of deciding U.S. elections before all the votes have actually been counted. Fox News ran consistently high vote counts for Trump, as opposed to the lower numbers predicted at CNN. Dramatic coverage continued into the wee hours, with a number of states said to be “too close to call” – including Michigan, Wisconsin, Pennsylvania, and Arizona, all of which eventually went to Trump, who won by a landslide.[6] 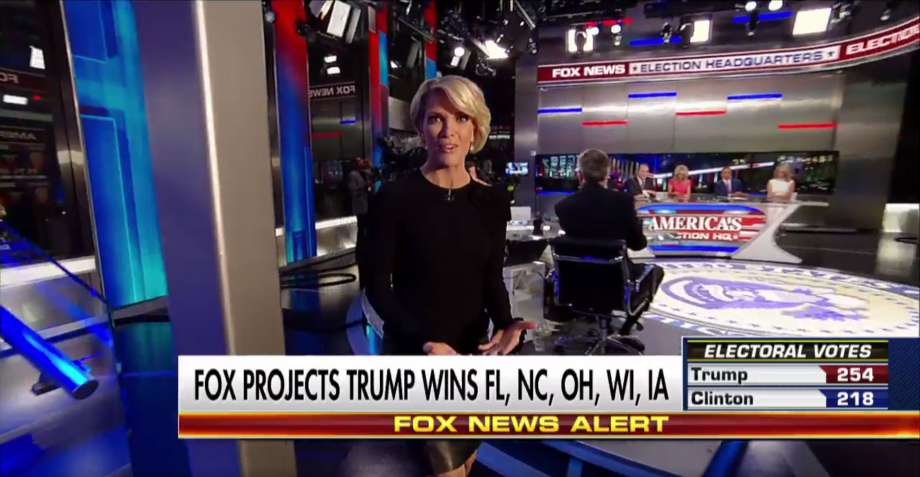 Although many states were “called” earlier in the evening based on partial results and exit polls, the last few states were agonized over by the networks, with Fox anchor Megyn Kelly walking back to the desk of experts twice to ask them why they could not call these key states – and when they might be able to do so. According to Kelly, she thought Fox would be able to call the election around 11 pm. She said she expected Clinton to win, until there was an abrupt shift, when “the real vote” started to come in. She ascribed the dramatic turnaround to “a hidden Trump vote…It was a resounding victory. I have never seen anything like this. You will never have a result this shocking where people got it shockingly this wrong.”[7]

A return to Anthony Weiner’s laptop may provide an explanation. 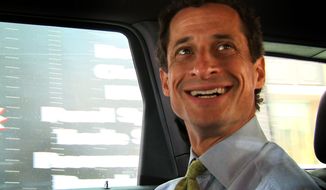 Unnamed but highly-placed sources, including NYPD detectives and prosecutors, revealed that the laptop contained “enough evidence to put Hillary (Clinton) and her crew away for life.” Also reportedly involved were Huma Abedin, Bill Clinton, Jeffrey Epstein – convicted pedophile, as well as members of the U.S. Congress, the Saudis, and other interests in the Middle East. Epstein and his “Lolita Express” have been associated with numerous well-known people, such as Alan Dershowitz, Prince Andrew, and Bill Clinton.[8] The NYPD reportedly said that if the FBI and Department of Justice did not issue indictments against “Clinton and co-conspirators,” they would go public with the e-mails. According to an NYPD chief:

What’s in the emails is staggering and as a father, it turned my stomach…There is not going to be any Houdini-like escape from what we found. We have copies of everything. We will ship them to WikiLeaks or I will personally hold my own press conference if it comes to that…People are going to prison.[9]

This being the case, what better way to stanch the blood than to give Trump the presidency?

Although Comey let Clinton off the hook, it seems clear that forces within the government had decided she was a liability. Should she be elected, the emails would come out, and she would be indicted along with many others. And Trump had vowed to investigate “crooked Hillary” with chants from supporters to “lock her up.”[10] Inconveniently, as it now turned out, the election had been fixed in favor of Clinton.[11] Clearly it was time to make a deal with Trump. 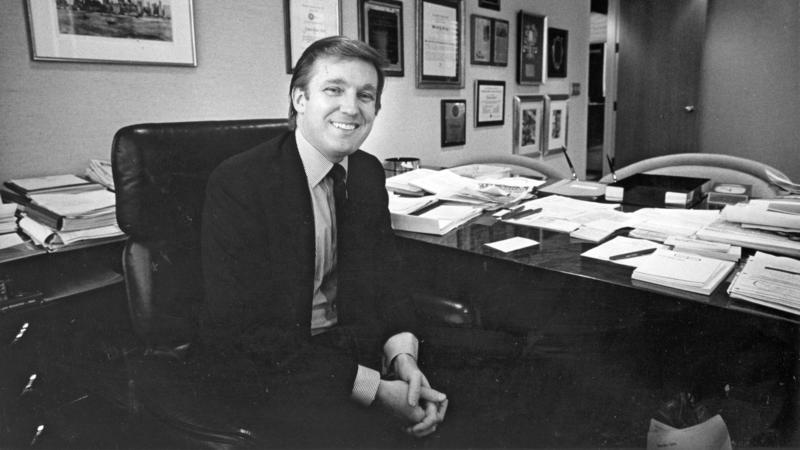 Donald Trump in 1985, shortly before the publication of The Art of the Deal. Image Los Angeles Times.

The best thing you can do is deal from strength, and leverage is the biggest strength you can have. Leverage is having something the other guy wants. Or better yet, needs. Or best of all, simply can’t do without.

Let’s say that Trump was approached by government insiders and told he could be president – if he agreed to certain terms. Let’s say that the deal was this: Trump gets a win on November 8th and becomes the nation’s 45th president; he lets all allegations against Clinton and her foundation drop; he respects Obama’s “legacy”; and he agrees to partner with Israel.[12] This deal was struck after Comey’s letter of October 28. Clinton was given notice as Election Day approached (although she may have held out hope that she could win). And the news teams were informed during the course of the election.

When the counter-fix went live, the networks experienced the turnaround – the “hidden Trump vote” referred to by Megyn Kelly. Around 10 or 11 pm, the anchors began to refer to Trump as the winner, frequently correcting themselves or qualifying their statements: “I mean, IF he wins,” or “that is, presuming he is elected.” This included Anderson Cooper and his cronies at CNN, who suddenly turned conciliatory toward Trump after months of abuse and slander. The consolation prize went to Clinton: winning the popular vote. Even this was predicted by the networks, with no surprise or consternation.

It’s strange how things can turn around.

Was this the deal of a lifetime? Or did Trump simply win the election?

This article was also published at MemoryHoleBlog.org and JamesFetzer.org.